This narrative begins a few pages into the story of my holiday; I have written to this point in ink and paper, and I now continue my narrative on my laptop; for the inconvenience of writing with pen and ink is really very great. What has already happened can be explained with very few words, though with less detailed descriptions than the original first pages.

It must be understood that we went to Haworth for a surprise on my tenth birthday. On the morning of that day I received a real letter from Charlotte Bronte herself. I seem to be very cool; but were I not so I should fill the whole page with expostulations of incredulous joy and wonder, and this is not my intention. Instead, I will copy in my history.

The letter was an invitation to stay at Ponden Hall. (Ponden Hall, it must be explained, in the house upon which Emily based Wuthering Heights, and Anne Wildfell Hall. Charlotte’s writing also may have been inspired by it). I am so confused as to whether the letter was really from Charlotte or not; I cannot say what I really think. It seems impossible, she died so many years ago, and yet it was her real signature; it was written with a dip pen, and in the style of a Victorian letter. I shall remain puzzled on the point all my days, and for all my days too I will jump for joy at the recollection of receiving that letter.

On the bed I discovered a pair of pantalets, a yellow velvet spencer, a cream coloured regency dress and a choice between three rolls of ribbon for my sash. There was also a pair of black boots with laces, and a real period pelice and bonnet. Tassy had already received his regency and Victorian clothes; and thus attired, I, Tass, Mum and Dad set off on our journey.

Us, playing in the garden in our regency clothes, just before we left for Bronte Country

Ferndean is the old castle in which Jane meets Mr Rochester. It is ‘a building of considerable antiquity, moderate size, and no architectural pretensions, deep buried in a wood.’ Such is Jane’s description of the place. She says also that as Mr Rochester’s father purchased the estate for the sake of the game covers, Rochester could get no tenant for it, so it remained ‘uninhabited and unfurnished, with the exception of a few rooms fitted up for the accommodation of the squire when he went there in season to shoot.’ To continue with Jane’s narrative, she came to the house

“just ere dark on an evening marked by the characteristics of sad sky, cold gale, and continued small penetrating rain. The last mile I performed on foot, having dismissed the chaise and driver with the double remuneration I had promised. Even when within a very short distance of the manor-house, you could see nothing of it, so thick and dark grew the timber of the gloomy wood about it. Iron gates between granite pillars showed me where to enter, and passing through them, I found myself at once in the twilight of close-ranked trees. There was a grass-grown track descending the forest aisle between hoar and knotty shafts and under branched arches. I followed it, expecting soon to reach the dwelling; but it stretched on and on, it would far and farther: no sign of habitation or grounds was visible.

I thought I had taken a wrong direction and lost my way. The darkness of natural as well as of sylvan dusk gathered over me. I looked round in search of another road. There was none: all was interwoven stem, columnar trunk, dense summer foliage — no opening anywhere.

I proceeded: at last my way opened, the trees thinned a little; presently I beheld a railing, then the house — scarce, by this dim light, distinguishable from the trees; so dank and green were its decaying walls. Entering a portal, fastened only by a latch, I stood amidst a space of enclosed ground, from which the wood swept away in a semicircle. There were no flowers, no garden-beds; only a broad gravel-walk girdling a grass-plat, and this set in the heavy frame of the forest. The house presented two pointed gables in its front; the windows were latticed and narrow: the front door was narrow too, one step led up to it. The whole looked, as the host of the Rochester Arms had said, “quite a desolate spot.” It was as still as a church on a week-day: the pattering rain on the forest leaves was the only sound audible in its vicinage.”

Thus is Ferndean Manor as portrayed in Jane Eyre. The old manor and the valley it is set in is based on a real place, the name of which is Wycoler. We were to pass Wycoler during our journey, and the plan was to stop here and look at the famed Ferndean, the ruins of which still remained in the heart of Wycoler Valley. Like Jane, we stopped about a mile from the old house. We ought to have dismounted; instead we climbed out of the car. Tass made the best amends that could be made for the lack of horses by helping me down gracefully, quite in the character of a regency gentleman.

In terms of setting Wycoler is just as the book describes, therefore I need not really describe it; if any future reader of my history wishes to know what it looked like, they have only to read over Jane’s description with the changes of full daylight, and bleak winter landscape, dripping trees and muddy grass instead of ‘dense summer foliage’.

However, I will describe it at least a little, for these are not quite the only changes that must be made. We walked first over a few yards of flat, moorish scraggy grass, wet with recent rain, and then descended down into the valley. A wooden gate blocked us a little way down; probably in replacement of Jane’s ‘iron gates with granite pillars’. Once opened it led to a small path through the valley with little difference from the one outside the gate except that the bank rose higher on either side, and the trees spread wider overhead, to make the path somewhat tunnel-like. It was just the same as the ‘grass-grown track descending the forest aisle between hoar and knotty shafts and under branched arches’ that is described in the book. As also in the book the path soon widened and the trees thinned. The small grassy path spread into a wider, fully formed track. We passed a house and we continued along the track; Tass jumped up onto the wooden railing that now edged the track and shouted ‘ahoy!’ What reason he had for doing so God only knows.

Ferndean itself now stood before us, but half deserted in the Brontes time, it was now merely a mass of ruins. It had little similarity to the Ferndean in the book other than the description of the ‘dank and green decaying walls’ and the fact that it was clearly a ruined castle or manor-house. There was a long stone seat in the midst of the ruins with the remains of a dome roof over it. Upon this I took my seat, and looked out through the ruins at the countryside around.

The next part of this history will be published soon.

Me and Tass, exploring the ruined Ferndean, and me sitting under the ruined dome described. 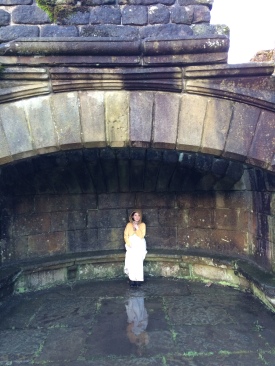